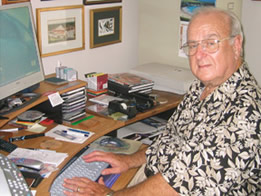 Your financial support keeps Hugh's News viable. We enjoy a 501 (C) (3) IRS Tax Exempt Status that enables you to get a tax break when filing your Federal Income Return.
Hugh Holmes Morgan was born in Birmingham, Alabama, on December 15, 1932. He is the son of the Rev. Mr. Hugh Henry Morgan and the Rev. Mrs. Julia Payne Morgan. His father was a bi-vocational church planter/pastor/evangelist, and his mother a missionary to China from 1920-29. When Hugh was six years old he invited Jesus into his heart to live there forever. He became an instant evangelist by sharing his new found faith in Jesus Christ with all the neighbors in his community.

Hugh graduated from Hewitt High School in Trussville, AL, in May 1950. He worked for A & P Tea Company, a family of super grocery stores, and for the Southern Railway where he became the chief clerk and assistant yard master in the Mobile, AL, office. It was there in 1952, that Hugh accepted a call to preach the Gospel of Jesus Christ. He resigned and attended Emmanuel College for one year.

He enlisted in the United States Marine Corps in 1953, and was a member of the Marine Band, Quantico, Virginia. After completing his enlistment in 1956, with the rank of Sergeant, he attended Furman University, Greenville, South Carolina, graduating in 1960, with a Bachelor of Arts degree in Psychology. Hugh was ordained by the Pentecostal Holiness Church in 1960. He received a Master of Divinity degree from Asbury Theological Seminary in 1963, and an honorary Doctor of Divinity Degree from Holmes Theological Seminary, Greenville, South Carolina, in 1975.

In May 1965, Hugh was commissioned as a chaplain in the United States Air Force. Among his assignments were McChord AFB, Tacoma, Washington; Elmendorf AFB, Anchorage, Alaska; and the Air Force Institute of Technology, Houston, Texas. In addition, he served as a chaplain in two USAF medical centers, directing the Clinical Pastoral Education Program for Air Force Chaplains. He remained on active duty until November 1975. While still on active duty he was elected by his denomination to serve as president of Southwestern College (Southwestern Christian University), Oklahoma City, Oklahoma. He served as president for two years. After resigning as president of Southwestern College, he pastored his home church, Good Shepherd Church, in Birmingham, AL for nine years.

After his release from active duty, Hugh remained active in the USAF Reserve Chaplaincy for 16 additional years, retiring December 1991, with the rank of Lieutenant Colonel.

In addition to pastoring and planting new churches in the United States, Hugh has participated in church planting, and mission crusades in Romania, Costa Rica, Cuba, and the Ukraine.

Some of the highlights of his career are:


The National Kiwanis Club selected Hugh Morgan as one of the Most Outstanding Young Men in America in 1968. Emmanuel College selected him as one of their "Most Outstanding Alumni" in 1975, and the “Distinguished Alumnus Award in 2004.” He was awarded the “Corvin Heritage Award” by Southwestern Christian University in 2005. He was awarded the Christian Service Award (an eagle) at the 60th Anniversary of Southwestern Christian University in 2006, for his leadership in helping to design the curriculum for the Master of Ministry degree program that meets the graduate level requirements for the Department of Defense 1304.28 for military chaplains in the Army, Navy, and Air Force. SCU has accreditation with the North Central Association of Colleges and Schools, and is listed in the ACE (American Council on Education) in Washington, DC, as a fully accredited institution of higher education.

He served as president of the Ministers' Association of Greater Birmingham, Alabama in 1979-1980. He served as a member of the World Missions Ministries Board of the IPHC from 1987-1995. He was selected to serve as the Director of Chaplains Ministries and Ecclesiastical Endorser for the International Pentecostal Holiness Church on 1 January 1998. It was in 1998 that he started Hugh’s News & Commentary. From thirteen subscribers, his electronic newsletter has grown to over 2,500 subscribers today with over 5,000 readers, with a website that reaches hundreds of others. Hugh's News, Inc. is incorporated as a non-profit Christian organization and has obtained a 501 (C) (3) IRS Tax Exemption.

On December 4, 2006, Hugh Morgan was elected by acclamation as the Vice Chairman of the NAE Commission on Chaplains at their annual endorsers’ conference in Alexandria, VA. Then, on December 7, 2006, he was elected by acclamation as the Chair Elect for the Endorsers Conference for Veterans Affairs (VA) Chaplaincy at their annual meeting in Alexandria, VA. This is the first time that a Pentecostal Holiness endorser has been elected to this leadership position. In January 2008, he was elected Chairman, Endorsers Conference for Veterans Affairs Chaplaincy. He serves as an ex officio member, the executive committee, the National Conference on Ministry to the Armed Forces, representing some 96 million voting Americans. In March 2009, Hugh was elected as a member of the Board of Trustees, Holmes Bible College in Greenville, South Carolina.

In April 2007, Hugh established the Hugh H. Morgan Chaplains Studies Endowed Scholarship Fund at Southwestern Christian University, Bethany, OK, to provide scholarships for military chaplain candidates who have been commissioned in the Army, Navy, and Air Force. In addition, he has established the Hugh Holmes Morgan Education Scholarship Fund, Inc., a non-profit corporation to provide scholarships for aspiring young men and women who desire to be military chaplains.

Presently Hugh lives alone in his home in Winder, Georgia. Melvine, the love of his life with almost 60 years of marriage, went to Paradise to live with Jesus on January 23, 2020. Stephanie died on August 3, 2012. Greg was hospitalized with a bacteria infection in his blood system that got to his brain. I am praying for his healing, full recovery and that God will make him whole. He resides in a group home.